Last night my youngest daughter took me to this fashion show. It is Amsterdam International Fashion Week this week but this show was in Eindhoven, just to be different. It was interesting to see a show close up but shocking to see how thin most of these 10 models were. The setting of the show was in the fabrication hall of Piet Hein Eek, really good. With life music and the 3 musicians in overalls as if they were part of the hall.

MLY is mainly knitted fashion though some was woven. I liked most what I saw, and some I would not mind wearing myself.
Very inspiring to see it all.
It was lovely to be taken out and very special to this venue. She works for one of the sponsors, so the treat was on them really.
Posted by Margreet at 11:54 1 comment:

Before and after finishing

I cut my sample from the loom 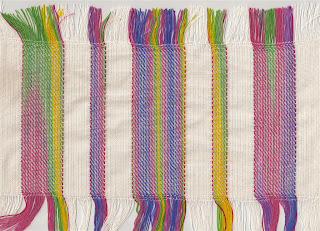 and washed and pressed it 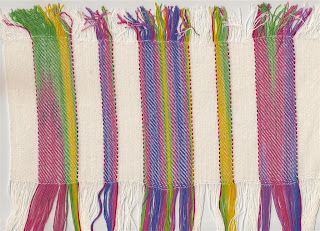 What a lovely difference. The Tencel has gone soft now and again a lovely drape like the black scarf.
Not so sure if I like the pink thread on the edges. It looked better with the black. To late to change that now, when the scarf is finished it might look different.
Posted by Margreet at 11:42 5 comments:

From black to white with coloured yarn

My silk/Tencel scarf is finished and it is as I thought it would be.
Lovely and bright in combination with the black.
It drapes well too after wet finishing and pressing.

So, on to the next project, the same silk yarn together with white Tencel.
I made my warp "in the round" again like I did with the last scarf. Not from left to right and back again but just going in a circle and when finished warping, cutting the warp.
This time though I just went in the round but did not check to keep the colour together as well as I did with the previous one.
So, the effect is that the colours are more mixed this time but I think the end result will be ok. 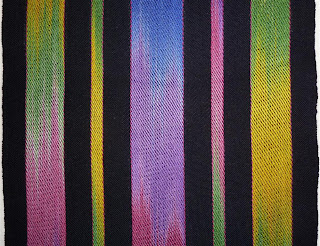 With the black I wove the coloured silk in a 3/1 twill. This time I'm weaving 2/2 twill so that both side will be the same. Not sure how I like the combination with the white Tencel. So, I'm weaving a sample first and see how it will come out when wet finished and pressed.

Here a photo of the first bit of weaving. 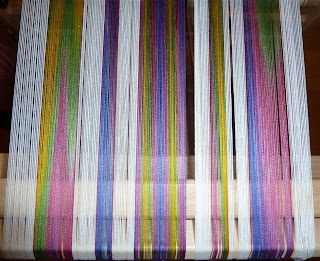 And here a photo of the warp where you can see that the colours are more mixed than on the previous warp, specially in the centre.

I've added a new lamp to the loom, a daylight lamp. It makes all the difference. It flexes at 2 points (just above the clamp and in the bend in the middle) so that you can have the light where you want it. 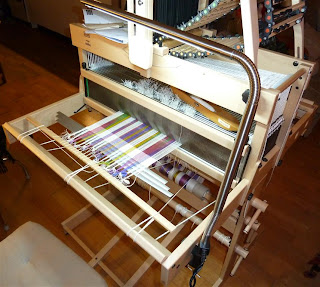 Only problem was that the loom frame was wider than the clamp on the lamp but by using the hole for the beam (that I don't use as I have the loom stand where the beams are on) I'm able to fix the light to the loom. 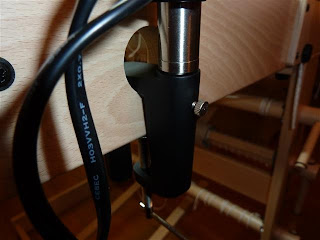 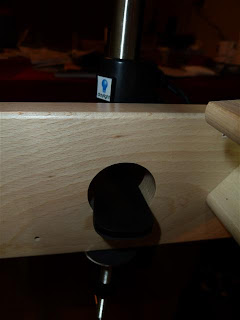 The light was also useful when I was unpicking the previous scarf where I had made a weaving mistake.

In September I went to the Network Drafting workshop by Alice Schlein at Devon Weaving Workshop.
My sample was almost a scarf and I've just finished and washed the sample. It is a short scarf (about 1m long) but I'll be happy to wear it as a happy memory of our last holiday together.
Usually I would weave a different thread between samples but here I just wove on and put a short thread at the side to know that I moved on to the next sample. That's how it could become a scarf and not another sample to put away in a binder. In place of the threads I have put some small beads (at the side) and also added some beads between the fringes.

The numbers refer to the samples. I put the drafts together in one photo 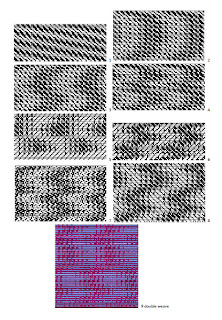 It shows very subtle the differences in the samples. It was great fun to design the different samples.
To find out more about designing Network Drafting you will have to read Alice's book .
I bought the book myself this way as a pdf file and printed it out and had it binded. I hope to get back to this technique very soon, on my Magic Dobby!


My last scarf cut of the loom this week is now drying. Will next wind a new warp with the same silk yarn together with white Tencel yarn.
Posted by Margreet at 21:30 No comments:

The scarf is woven, now it needs finishing.
It is long enough for the mistake to be undone, so may be I'll do that. It depends on how easy it is to unpick the weft yarn. The mistakes are at the very beginning. 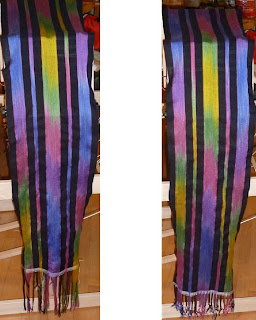 Here a photo of both sides. I note that the centre colour stripe is blue on both sides. Just the way it came out, not planned.
I've enjoyed the weaving, it was not complicated to weave, but the result is very likeable.
I'm very happy with the loom.Though I'll have to watch that the right amount of shafts are lifted.
I wonder how that will go once I have the interface box, in place of the pegs and bars. I'm hoping that this will come next month.
I have more of the self dyed silk yarn, so I'm planning one more scarf like this but than with white. I'm sure that will be less striking than with the black. But I want to make it a gift and I think it will suit that person better.
Posted by Margreet at 21:37 3 comments:

Yesterday I started weaving this first warp on my new Magic Dobby.
Oh, after some time I discovered 2 mistakes. I've not gone back to undo but now I watch every time that the correct amount of shafts are lifted and not more than the 7 needed.
I suppose a learning curve to get to know my new loom..... 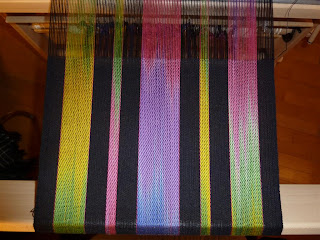 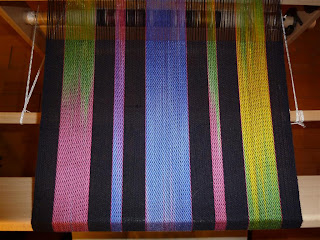 Is it not colourful to look at?

In the next photos are the mistakes visible.
The first shows the front with the longer warp floats over 6 rather than 3 threads. 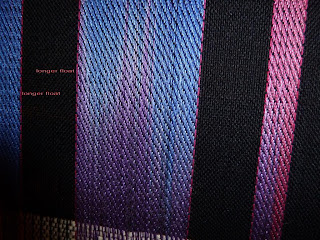 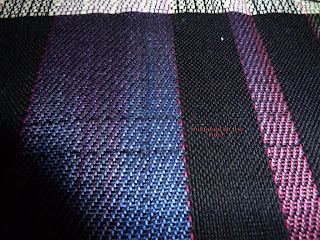 The last shows the back with 2 longer weft float. 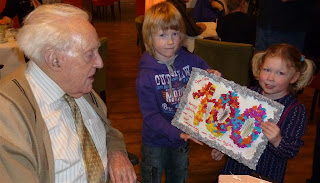 So, it was party time with family and friends.
His eldest sister was nearly 101 when she died, so he is the second to reach this milestone in the family.
He cannot see much any more so the little ones had made a drawing with 100 that he could "feel".
He copes very well with his handicap by listening to spoken word (books, magazines and papers) and radio, he keeps up to date this way with all that is going on around him.
Posted by Margreet at 18:47 5 comments:

Re-threaded and ready for weaving

I've done it. Took all the threads out and started again threading the heddles on a total of 10 shafts this time!
First I folded the front up again so that I had easy access to the heddles. 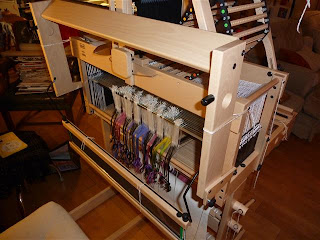 I'm using a reed 4 (4 openings per cm) and had worked out how many threads per opening beforehand. I used this schedule when re-threading, bundling the correct threads together for each opening after I had threaded the heddles. 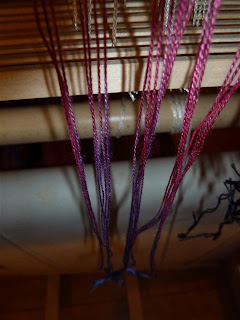 Next, I bundled 6 bundles together, they would be the correct amount once threaded through the reed for tie-on to the loom. 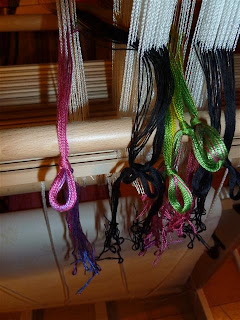 I threaded the black yarn on shaft 1+2 and the coloured yarn on 3 to 10 straight through. To not make a mistake I count out heddles in groups like this: 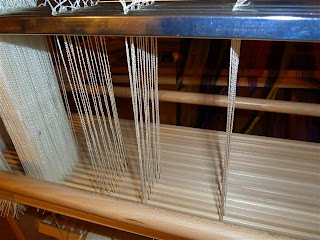 It all went very well and quick.
Once it was all threaded through the heddles, I could pick up the bundles that I had made and started to thread through the reed. 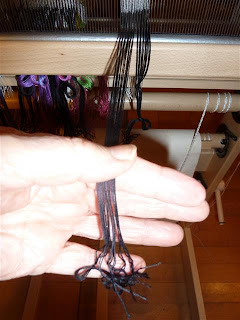 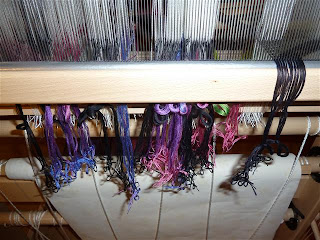 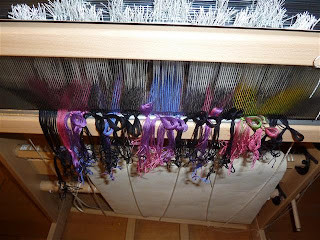 Once it is all threaded through, I untie each bundle and make sure that each thread is the same length by pulling the bundle and than make a loop at the bottom of the bundle. I go through each bundle like that.
All I had to do now was to tie-on to the loom.
I use a very strong piece of yarn, about 6x the width of the weaving. 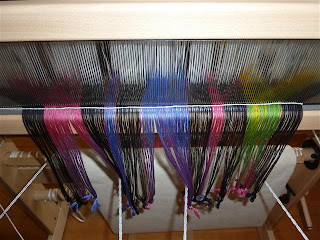 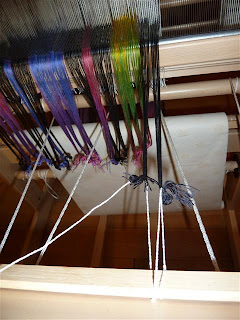 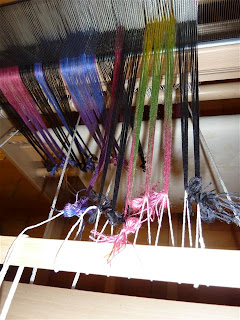 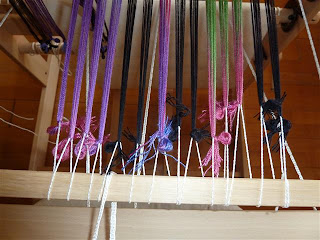 When they are all done, you keep on adjusting the tension until they are all the same and tie the end piece fast on so that it will not loosen up again. 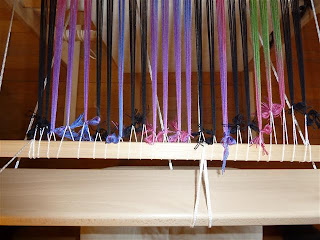 I'm now ready to start weaving, but that will have to wait until another day. 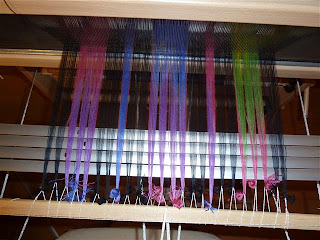 First something to celebrate, more on that next time.
Posted by Margreet at 00:39 No comments:

At last I'm feeling like weaving again and have tied the warp onto the beam.
Next thing was to put the pegs in for weaving, than disaster struck!
What had I been thinking when threading the heddles!
I have a tabby for the black threads on shaft 1+2 and a 3-1 twill for the coloured silk BUT I threaded the coloured threads over 6 shafts on 3 to 8 !!! So, now I cannot weave a 3-1 twill. 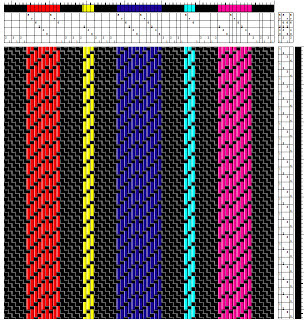 I used more shafts as I did not have enough heddles on shaft 3 to 6. I should have extended with 4 more shafts rather than just the 2, using 3 to 10. 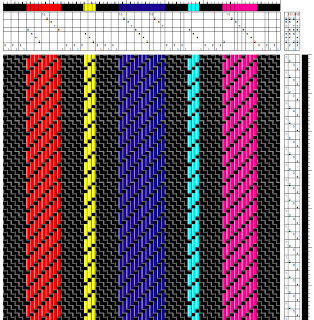 This happens when you start a job like this when you have flu coming on.
So, the only option is to re-thread the heddles if I want to weave 3-1 twill and that is what I want to weave.
Better start quickly.........
Posted by Margreet at 13:05 3 comments:

2010 has come to an end. Is as well that we do not know what is in store for us. One year ago I would not have thought I would be on my own now, a year later.
The flu really knocked me out these last few weeks. I'm slowly recovering and hope to be my old self again very soon. 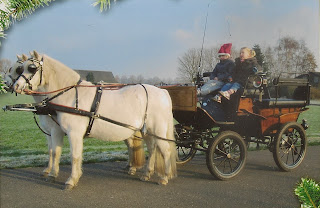 2011 will bring new chances and I will make the most of it.
Posted by Margreet at 17:27 No comments: