Slowly feeling better again.
Hoping to get back to my intensive project. My intention is to have it finished by the end of the year. After this forced break I still hope to reach that goal.
So, there will not be much time for weaving, but I will try and set up a short warp on my new Jane loom so that I can play with the moiré weaving. Had to miss the guild meeting last Friday.
It's getting colder here now, with forecast for some frost and light snow. Good weather to be happy indoors.
Posted by Margreet at 21:13 2 comments:

Just back from a week London where I had some great teaching by Bonnie Inouye. First was a half day on The Flowing Line and another half day on Point variations at Handweavers Studio. She showed us lots of samples and so much that is possible. 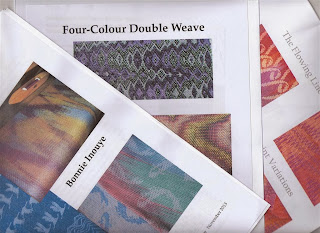 Next was a Complex Weavers Study Day on Four-Colour Double Weave, working on the computer with Fiberworks and another Complex Weavers Study Day on Turn the Tied.An overload of information that wants to be put into practise.
I was to late for the actual workshop she was giving Opposites Attract. That was fully booked up almost directly after it was announced. Will have to wait for that another time.
Lovely to meet up with old friends and meet new weavers.
I took the train again but both ways was not without it's hiccups between home and Brussels. Roll on Eurostar to Amsterdam! I think we have to wait until 2016 for that to happen.
Have to get over my cold now, not much doing until I feel a bit better.
Posted by Margreet at 20:25 4 comments:

Just back from our yearly National Weaving Day. Always nice to meet up with friends and like minded people. It was a well organised day.
The talk by Loan Oei was so interesting, as I expected it to be.
Of course I picked up my copy (plus 2 for friends) of Marian Stubenitsky's book (240 pages and over 1200 photos and illustrations), it is a beautiful publication. 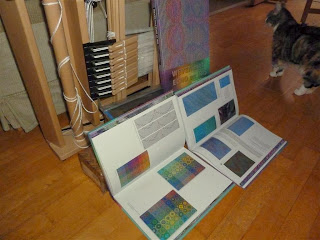 and a new loom :-)
I did not really have a loom to take with me to workshops, so I invested in a Louet Jane. As we will be weaving Moiré with our guild this winter, I thought this was the right time to get one.
Posted by Margreet at 16:52 4 comments: