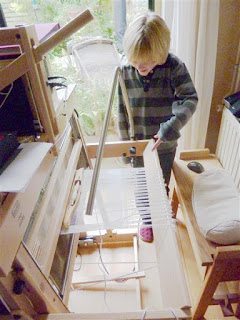 Last Sunday I took my grandson back home as it was the end of half term. He enjoyed very much playing with my Wii Fit Plus. Forgot to take a picture from him playing with it, but I have this one... 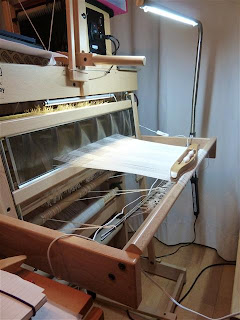 In between the painting, I try to do some weaving. I've made another ondulé warp, intended for my local Guild exhibition next Spring. It's not going very fast but at least I can weave a bit when I want to.

I have a day light lamp attached to the loom together with a led light (just above the heddles) that I bought recently.
It makes a difference to have both lamps on: 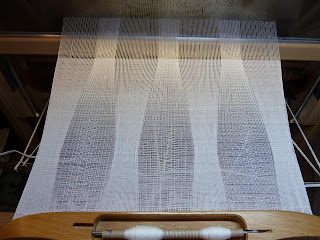 I've made photos (without flash) of the woven cloth with the different lighting. 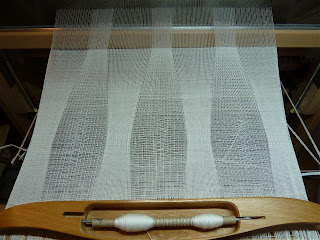 Above photo is just the day light lamp on. 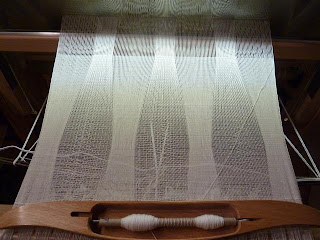 Above photo is just the led light on.
Not sure if the differences are clear to see in these photos.

The yarn I'm using is a fine Tencel for both warp and weft. I designed the warp using 7 fans in the reed. Like in the blue warp I'm weaving tabby in 4 columns (fans) and the columns (fans) in between are woven twill. The sett for tabby is correct, for the twill it's a bit to spaced out but I like it together. The warp is just enough for one scarf.

The exhibition that we are holding next Spring with my local Guild has the limitation that we use just white yarns. The thought behind this is that there will be a unity together. We are allowed to have accents of silver or transparent yarns.
My intention had been to weave something with texture. But I'm just hooked using the ondulé reed and I think this will be different. May be I'll get around to weaving another piece.

The weather is getting colder now, the outdoor painting will end when the frost comes. I'm hoping to finish the front of the house and the back will have to wait until Springtime.
I was also able to clean the gutter, having the scaffolding there. But there were quite a few wasps there in the gutter and one managed to sting me, despite me being very careful. That was 2 days ago and it's still bothering me.
When the painting ends, it will give me more time (and energy) to weave again ;-)
Posted by Margreet at 22:31 2 comments:

I've had 2 new windows installed. Oh so much more light in the house.
In the lounge before: 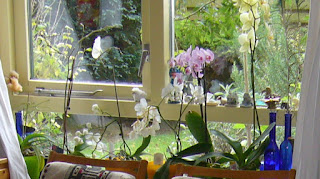 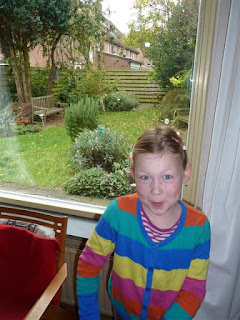 So no weaving just now, to many other things ;-)
The warp is on the loom and the new light really worked well with the threading!
Posted by Margreet at 19:06 No comments:

Lidl had a handy light this week on offer. I was able to fix it to the front of the loom. It will be very useful when threading. 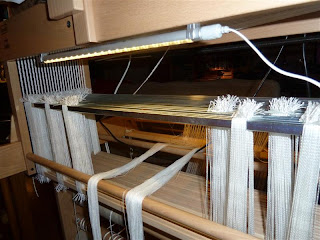 At the back I have a spotlight, very useful when starting to get the warp on the loom 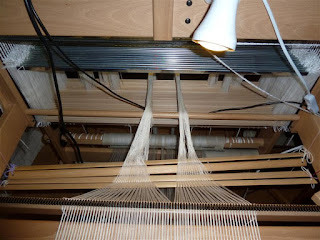 The warp is now ready for threading. Not sure when I'll have time to do that.
Posted by Margreet at 23:09 No comments:

I've had our wedding rings made into a bead that I can wear on my Pandora chain. I asked Marike to come up with a design. Today I was able to pick up the end result. The surface has a special meaning to me and was the starting point of the design.

I'm very happy, it's like a nut or cocoon. How wonderful. The actual size is 1cm diameter and just over 1cm in length.

The frontdoor has been painted now 3 times and I'm hoping that it looks good in the morning. The paint is still drying. I'm hoping that I'm able to shut the door soon so that I can go to bed.  :-)
Tomorrow rain is forecasted so a break from painting and having visitors instead. Cake is ready ;-)
Posted by Margreet at 22:14 2 comments: 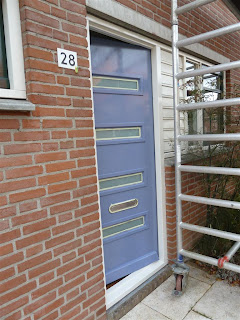 Slow progress with the painting, but my door has a new colour. It needs a few more coatings but I'm pleased with the result so far.

I'm waiting for some windows to be replaced and for some estimates for a few jobs that needs doing.
So, waiting is the game at the moment. Apart from painting of course.

I have made another warp but in the evening I do not feel like doing any more than just collapse :-) so it's not yet on the loom.
Posted by Margreet at 21:38 No comments: 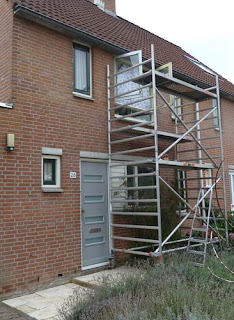 Weaving is at the back burner at the moment as I've started painting the house. I can feel muscles I had forgotten I had ;-)
We had some lovely days but now the rain has come so I'll just have to get some plastic sheeting up, that way I can continue with what I've started. It will be nice to see the green go and all becoming white. But that means that it needs 2 may be 3 coatings. And of course 24 hrs between each coating. Oh well, it will get done somehow.
Posted by Margreet at 20:25 1 comment: